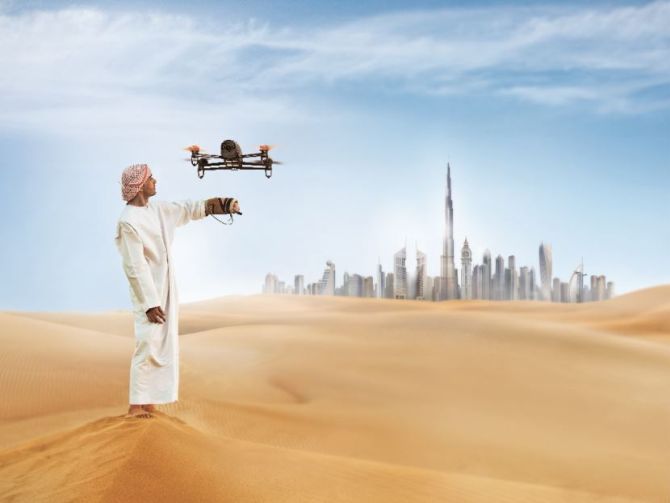 As the winter season approaches, the number of tourists grows significantly. Most of them, organizing picnics in Dubai deserts, leave litter after them. To preserve these deserts as clean as possible, the Waste Management Department at Dubai Municipality has decided to involve drones in the task. By flying long distances, these machines detect the polluted areas and report about them.

After the announcement of including drones in the process of cleaning Dubai, rumors were spread that many people would be fired. Yet, shortly afterward everything was settled. In reality, these unmanned crafts will be sent to the large swipe deep in Al Ruwaya and Al Khawaneej zones where tourists love to spend much time and have picnics. After a drone registers about a polluted spot, inspectors are immediately sent to clean the areas. Therefore, this innovative approach will by no means serve as a reason to fine people. Together with workers, drones will preserve the cleanness of Dubai’s deserts.
Actually, this innovation was first tested last winter and showed far not bad results. Particularly those results were the reason the Municipality is planning to involve even more drones to monitor beaches around Dubai. This way both more work-hours will be saved, and a thorough cleanness will be achieved. Nowadays, inspectors visit the desert once during weekdays, and three times during every weekend. This way they watch the littering habits of both native and tourist campers. Once a case of polluting is registered, the camper is fined Dh500. As a rule, every winter camper has to get an approval from the building department and, hence inspectors don’t find it difficult to tag a fine to each offender’s car number.
Inspectors of Waste Management Department at Dubai Municipality also very frequently pass out brochures to campers with information how important it is to preserve the cleanness of deserts and the entire surrounding environment. Besides, there are also plenty of trash bags in all winter camps. Additionally, there are big garbage bills placed on sides of main roads of every desert area. So, whether the visitors are winter campers or simply occasional tourists, a high level of awareness is guaranteed.
However, there are still campers who manage to pollute Dubai’s deserts and stay unpunished. Some visitors even state their vehicles are too expensive and luxury to transfer garbage even if it is left by themselves. That is why it is also prohibited to use the correct tools and bags not to damage or pollute cars.

Nevertheless, today the overall awareness of people both incoming and local concerning the importance of preserving environmentally clean Dubai has raised. Most campers clean after themselves and encourage others do the same.
As Al Safaei states, perhaps the biggest problem in preserving Dubai clean is its relatively small size and the great quantity of people of different nationalities residing here. Sometimes it becomes hard to reach out to them, and persuading them to keep Dubai clean has no sense or hope. Particularly here drones are a great help.
This year the awareness campaign under the name “My Desert is my Environment” organized by Dubai Municipality was a great boom in the city and beyond its borders. Over two hundred visitors camping in Al Tayarea were deeply informed about the necessity to keep the environment clean.