Two five-band cameras, the RedEdge-MX and the new RedEdge-MX blue, this solution enables the most advanced remote sensing and vegetation research applications.

DOUBLE THE SPECTRAL RESOLUTION.
HALF THE HASSLE.

Integrating two five-band cameras, the RedEdge-MX and the new RedEdge-MX blue, this solution enables the most advanced remote sensing and vegetation research applications.

The performance you rely on from RedEdge-MX with a new coastal blue band, a new green band, and three new bands in the red to red-edge region of the spectrum. Combined with the bands in RedEdge-MX, the 10 bands in the Dual Camera System enable direct comparison between satellite and drone data. Already have a RedEdge-M or RedEdge-MX? Buy the new RedEdge-MX blue kit and get double the spectral resolution. 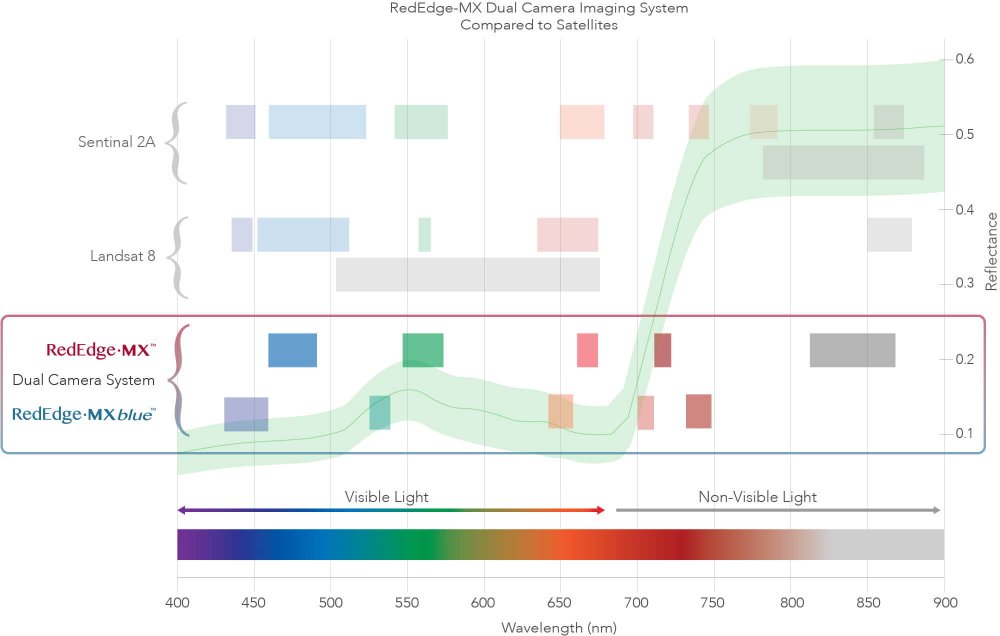 Flying with two cameras is as easy as flying with one. This solution is compatible with a wide range of aircraft, from large fixed wings to small multirotors, and comes standard with an integration kit for DJI drones.

Because the two cameras are both versions of RedEdge-MX, flight planning and data processing can be done with industry-standard tools like Pix4D and Agisoft.

Double the bands mean double the analytical capabilities. This solution captures synchronized, pixel-aligned imagery which allows the bands from both cameras to be used interchangeably for the creation of more indices.